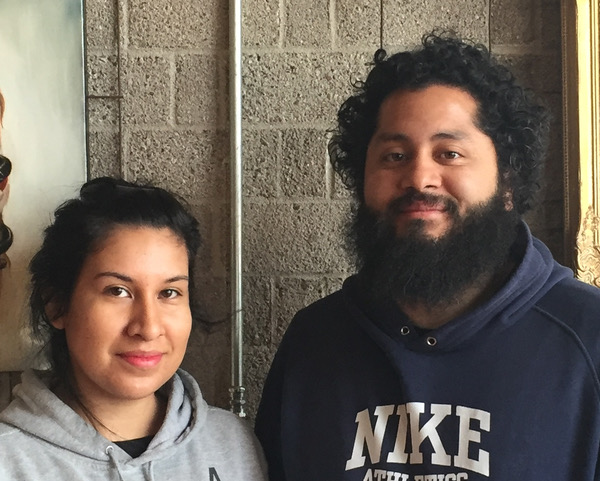 Local artists Carol Roque and Aldo Jeffrey will be featured this month at Fair Trade Cafe.

Carol is a self-taught oil painter. Her work primarily consists of portraits of characters from her imagination. She has been drawing ever since she can remember. Art is a way for her to express emotions and feelings she can empathize with, as well as explore ideas she finds intriguing. She moved to Arizona from California when she was 11, and has been pursuing a career in art for almost a decade. As she puts it, “painting can sometimes be a coping mechanism, other times, a craft, an obsession, a way of life…sometimes, it’s everything.

Aldo is an aspiring game developer. He was born in Guyana but has lived in Arizona for over a decade now. While he has been making and selling art at First Fridays for over a decade, he sees himself more as a storyteller than a fine artist. Carol and Aldo collaborate under the pseudonym of Broke Bot. Together they create artwork that blends their styles and interests together seamlessly, creating something greater than the sum of its parts. The name BrokeBot comes from a combination of screen names they’ve used online. (Brokeneyeball and ChampagneRobot). 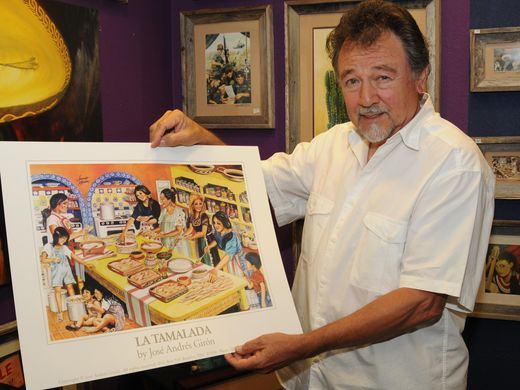 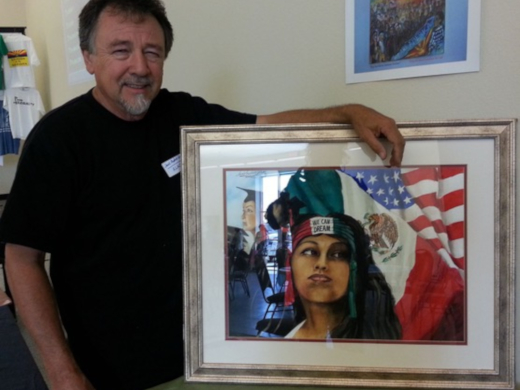 José Andrés Girón has been dedicated to art since early childhood.

From his father’s side his New Mexico roots can be traced to the first settlers on the Rio Grande. From his mother’s side to early Hispanic Arizonans and old Mexico rich cultural history.

Family and culture has influenced his choice of subject matter in deciding what is important to express in his art. His work almost always depicts the positive and beautiful things of the Hispanic/Latino culture.

“Andrés”, as he likes to be called, was born in Phoenix, Arizona and lived by the airport close to the Golden Gate Barrio.

His works speak volumes not only to the Latino culture, but to all cultures.

Enjoy the pleasing subject matter and the bold colors of Andrés work at Fair Trade Cafe during the month of March. 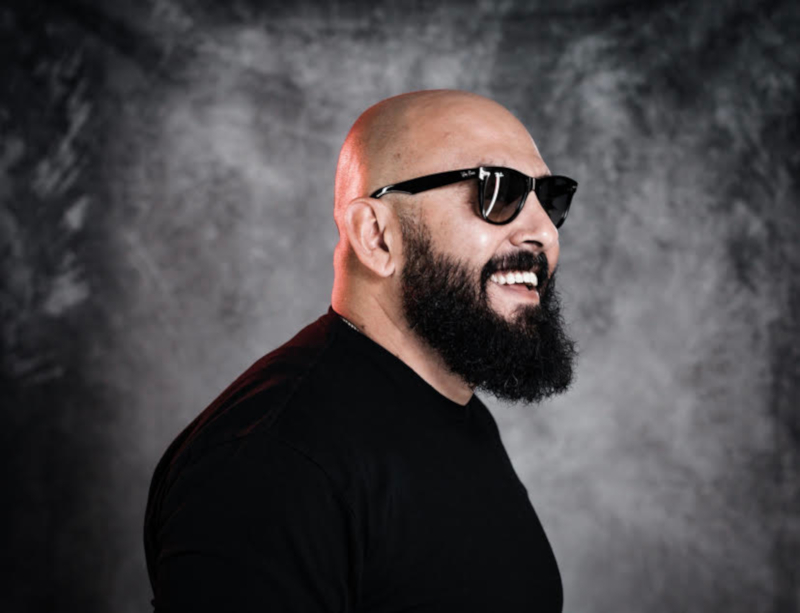 JUST IN TIME FOR VALENTINE’S DAY, Adam "A-Bomb” Vigil, will feature his newest paintings, never before seen, from his series titled “Lover’s Lane”, featuring 20 acrylic paintings on canvas of 10 Chicanos and Chicanas at Fair Trade Cafe.

Adam “A-Bomb” Vigil was born in Phoenix, AZ in 1973. He has been creating works of art in all mediums from an early age, beginning as a graffiti artist in one of Arizona’s toughest neighborhoods.

Through his teens, he was creating flyers for parties, airbrushing clothing, screen printing t-shirts, and creating graffiti backgrounds for Rap music videos. His work evolved throughout the years as he continued to digitally design custom logos and develop clothing line brands in the hip hop community.

In 1996 “A-Bomb” lost vision in his left eye in a tragic accident. This event gave him a new perspective on life. Family and Art became his major focus.

A-Bomb’s colorful, Latino influenced, works delight all ages of viewers. His murals can be seen throughout the downtown area and his paintings are in major galleries around Arizona and California. Don’t miss this rare opportunity during the month of February to see his paintings at Fair Trade Cafe (1020 N. 1st Avenue, Phoenix).

A-Bomb’s Instagram site is www.instagram.com/abombtheartist/
This exhibit is curated by Philip Talarico of Downtown Artists Collective of Phoenix 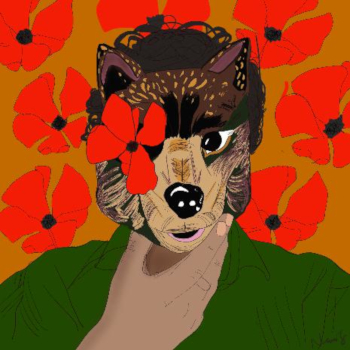 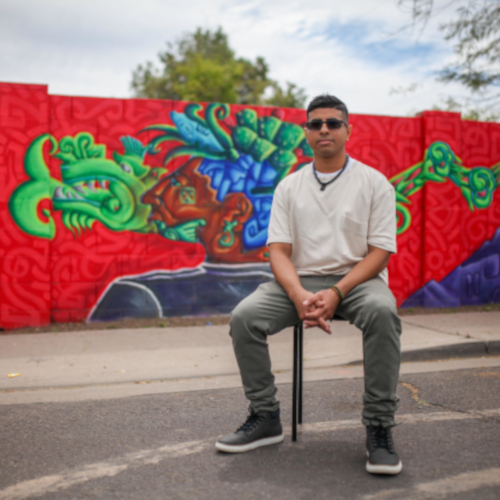 Edgar 8ahau Fernandez was born in Los Angeles, California in 1990. In 2000 his family moved to Phoenix, Arizona where Edgar connected to his Xicanx identity and his passion for creating modern ancestral art. It was through the action of collaborating with his community that sparked his motivation to be a full-time artist. Fernandez completed his BFA in painting at ASU in Spring 2019. Since 2013, he has accomplished public recognition in Arizona through solo exhibitions, group shows, awards, mural projects. Currently, Fernandez works on his craft by developing bodies of work that empowers the viewer through his cosmovision. Edgar's focus is to create artwork that inspires creativity, imagination, resilience, and roots within the viewer. 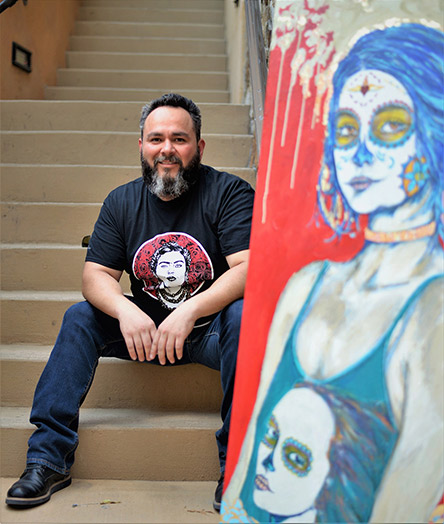 Hector was raised in the small border town of San Luis Rio Colorado Sonora (Mexico). He lived there until his late teens and later went on to study in the United States. He earned an Associate degree in Arizona Western College. He always enjoyed art, and even though some of his work was published and he sold drawings and paintings throughout college. He never thought he would make a living at it, so he focused his energy on other things. His goal was to become law enforcement like his father, in fact, his studies focused in Criminal Justice and Sociology.

For the last 16 years, Hector D. Llamas has acquired a modest yet innate reputation with firsthand experience of the art world from a unique perspective. From some of the best interior designers in Arizona to an endless diversity of artists and art collectors.

Hector’s engaging images reflect customs, beliefs, and lifestyle ideas handed down through generation, elaborate and simple. A modern and elegant, approach to tradition with a progressive attitude. With his nostalgic and iconic “Dames” Hector Llamas is relatable to the modern believer of traditions and stories. He uses every medium and technique in his arsenal, from printmaking and drawing to painting and glazing to obtain a visual hold on memories and imagination and beauty.

Born Pittsburg California and raised in the small border town of San Luis Rio Colorado Sonora (Mexico). He lived there until his late teens and later went on to study in the United States. He earned an Associate degree at Arizona Western College. In 2000 He received his Bachelor of Fine Arts with an emphasis on printmaking, drawing, painting, and teaching.

Local to Phoenix for the last 20 years Hectors work can be seen in various venues. Currently has art showing at the Herberger Theater, Univision AZ station, Think Art Gallery, The regional Museum of San Luis Rio Colorado Sonora Mexico, as well as in Think Fine Art Gallery, and more. 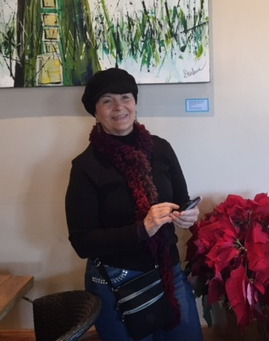 After teaching for 40 years, it feels so good to create on my own terms. As a child, I wanted to be an architect and I loved playing with blocks. I had a whole room full of blocks that I did not have to put away. So I played with geometry. You will often see geometry in my work. I see geometric shapes everywhere and they often show up in my work.

I had fabulous art teachers in school. One particular art teacher that I had for several years really influenced me. He told us over and over again, “We invent, we create, we do not copy, we are artists.” My work is all about creativity. To this day I cannot allow myself to copy. My creations are made with a focus on the elements and principles of design.

I have a master’s degree from California State University in Los Angeles. Along with teaching many classes to educators on how to teach art education at the university level, I have also written several books for teachers on how to teach art to young people. I received many honors as an art teacher and was selected Elementary Art Educator of the Year for the fourteen western states.

I am now a docent for the Phoenix Art Museum and love to lead student tours focusing on math and art.

My art has been on display in many Phoenix/Scottsdale area locations and I have had several one-woman shows. 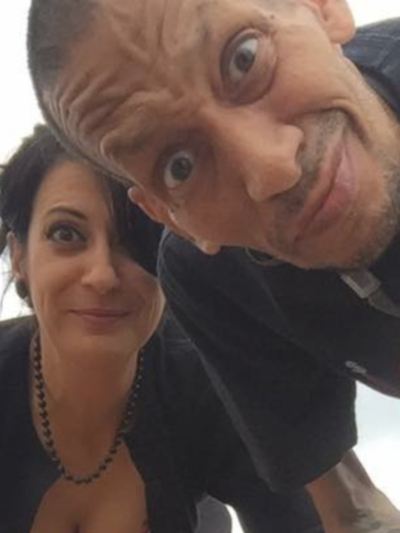 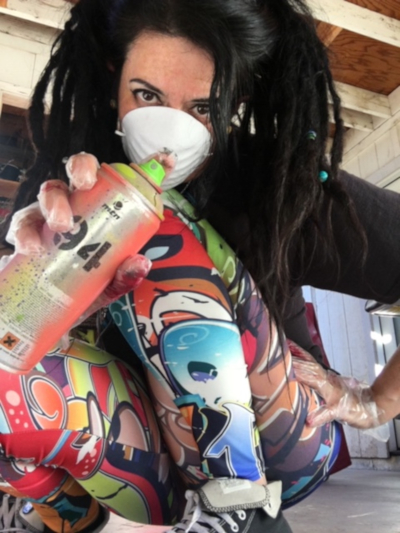 Shona Longoria was born in Montana but moved to Joseph city Arizona at the age of 9.

When Shona was a teenager her family moved to the other side of the “train tracks”. It was there watching the trains pass by, that she fell in love with spray paint and the old school writing of the late ’80s.

When Shona finally picked up a rattle can, the boys teased her so badly about making the paint “run”, that she put down the can and did not touch it again for 27 years, at least not until she fell in love with spray paint artist Jules Demetrius in 2016.

Unfortunately, Jules had been diagnosed with 4 types of stage 4 cancer before they met.  Knowing that he would be worth the pain of losing him,  Shona and Jules immediately started a life together.

After seeing her love for the spray can, Jules insisted that Shona learn how to paint. Although she resisted learning,  she did insist on helping him save energy with every painting he did for the next 7 months and was always there assisting Jules somehow. Usually shaking cans.

After Jules passed, in order to avoid the silence, Shona started shaking cans again. In order to smell the spray paint in the air again, she started painting. Painting leads to stenciling, where Jules had given very detailed lessons before his passing.

Eventually, Shona’s survival techniques, turned into profit when she accidentally sold her first painting. By the end of Shona’s second year painting, she had secured 3 exhibitions. She sells an average of one painting a week. Although she does not have a website, she does have an Instagram page and can be followed @isprayflat

This exhibit was curated by Philip Talarico of Downtown Artists Collective